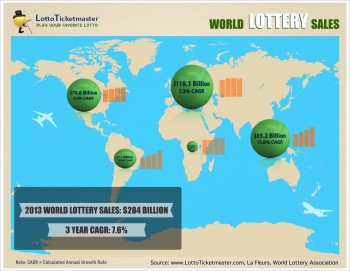 It is clear consumers love to play against the odds for a chance to win big.

Global lottery sales topped $284 billion in 2013, growing at 7.6% CAGR from $228 billion in 2010. Recent data from the World Lottery Association shows worldwide lotto sales continuing to grow in 2014, a nine-month on nine-month increase of 10.1%. Latin America and Asia Pacific regions continue to perform strongly, showing double digit growth rates. Fuelling the Asia Pacific growth is China lotteries where sales were up 24.1% through the first 11 months of 2014, contributing $55.8 billion of global lottery revenue.

European lottery markets have reversed the negative growth observed in 2013, showing a 4.2% increase over a nine-month on nine-month period in 2014. North American lotteries show anaemic growth at 0.8% over the same period.

All in all, industry pundits expect that 2014 worldwide lottery sales to reach nearly $300 billion, with positive growth observed across all markets. 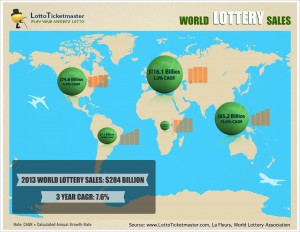 Embed World Lottery Sales & Growth on Your Site: Copy and Paste the Code Below

More than $1 BILLION Up for Grabs